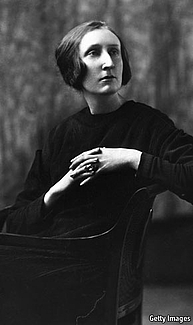 Echte naam
Edith Sitwell
Over mijn bibliotheek
Manuscripts, notebooks, correspondence, page and galley proofs, photographs, address books, and financial and legal records along with Sitwell's personal library are housed in the Harry Ransom Center at the University of Texas at Austin.
Over mij
Dame Edith Louisa Sitwell DBE (7 September 1887 – 9 December 1964) was a British poet and critic and the eldest of three siblings (her brothers were Osbert and Sacheverell) who developed a formidable literary and artistic clique around themselves in London in the period roughly 1916 to 1930. Edith Sitwell once wrote: "At the time I began to write, a change in the direction, imagery and rhythms in poetry had become necessary, owing to the rhythmical flaccidity, the verbal deadness, the dead and expected patterns, of some of the poetry immediately preceding us."

The Times (London) stated in 1955 that "she writes for the sake of sound, of color, and from an awareness of God and regard for man." She believed that "Poetry is the deification of reality, and one of its purposes is to show that the dimensions of man are, as Sir Arthur Eddington said, 'half way between those of an atom and a star.'" Babette Deutsch in Poetry in Our Time his written: "like the medieval hangings that kept the cold away from secular kings and princes of the Church, the finest of [Dame Edith's] poems have a luxurious beauty that serves to grace the bareness, to diminish the chill of this bare, cold age."

Robert K. Martin summed up Sitwell's literary career in Dictionary of Literary Biography: "Her career traces the development of English poetry from the immediate post-World War I period of brightness and jazzy rhythms through the political involvements of the 1930s and the return to spiritual values after World War II. Her technique evolved, and, although she always remained a poet committed to the exploration of sound, she came to use sound patterns as an element in the construction of deep philosophic poems that reflect on her time and on man's condition. Edith Sitwell needs to be remembered not only as the bright young parodist of Facade, but as the angry chronicler of social injustice, as a poet who has found forms adequate to the atomic age and its horrors, and as a foremost poet of love. Her work displays enormous range of subject and of form. With her contemporary [T. S.] Eliot she remains one of the most important voices of twentieth-century English poetry."

During the early 1950s, Edith Sitwell received numerous honors. Four honorary doctorates from Leeds, Durham, Oxford, and Sheffield universities were bestowed upon her. In 1954, she was made Dame Commander of the British Empire in the Queen's birthday honors list.

Failing health forced Sitwell to move away from her childhood home in Renishaw and spend the final years of her life in a small flat and, later, a Queen Anne style cottage she called "Bryher House" in Hempstead. During her later years, with the help of her personal assistant Elizabeth Salter, Edith published her final volume of poetry The Outcasts (1962) and the sequel to Fanfare for Elizabeth, The Queens and the Hive (1962). Sitwell died in 1964 and her autobiography Taken Care Of was published posthumously in 1965.
Woonplaats
Weedon Lois, Northamptonshire

EdithSitwell voegde toe:
A book concluding with As a wife has a cow, a love story door Gertrude Stein