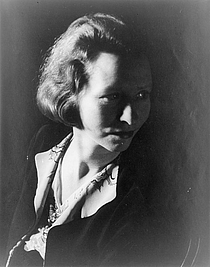 Over mijEdna St. Vincent Millay (1892-1950) was one of the most popular poets of the 1920s and 1930s. She was born in Maine, graduated from Vassar College in 1917, and then lived in Greenwich Village until 1923, the same year she won the Pulitzer Prize for poetry. In 1923 she married Eugen Boissevain and moved to Steepletop farm in Austerlitz, NY, where she lived until her death.

Over mijn boekenAfter Edna St. Vincent Millay died in 1950 at her home, Steepletop (just a year after the death of her husband), her sister Norma inherited the house and all its contents, including all ESVM's books. In 2010 Steepletop opened as a museum run by the Millay Society, and ESVM's books can still be seen there in the library the poet herself used almost daily. An initial inventory of the books was made in 1950, and the partial, incomplete inventory was digitized by Amanda French (LibraryThing user amandafrench) and used to create an online catalog at http://steepletoplibrary.org. The Millay Society is currently working to create a full and accurate catalog of the books at Steepletop, which include books owned by Millay's husband Eugen Boissevain and Boissevain's first wife, the feminist activist Inez Milholland. See more about visiting Millay's house and her library at http://millay.org.