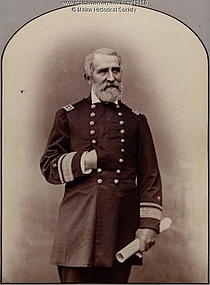 Over mijGeorge Henry Preble was born in 1816 to Captain Enoch Preble and nephew to Commodore Edward Preble. He participated in the Seminole War, the St. Louis' circumnavigation, Perry's Expedition to Japan, and the Mexican War. When Virginia seceded, he remained loyal to the Union and moved from Norfolk to stay with the US Navy. Commanding the USS Katahdin, he served under Admiral Farragut blockading the Mississippi River. The SS Oreto/CSS Florida escaped him and cost him his commission. He was only reinstated after the Florida's commander testified that it was only due to the Confederate ship's greater speed that he was able to evade Preble. Later in the war, the Florida again outran Preble's ship. He retired at the rank of Rear Admiral in 1878 and devoted himself to naval history. In 1873, the Star Spangled Banner was lent to Admiral Preble. He then took the first known photograph of it and attached it to a sailcloth backing for the photo. He died at his son's house in Brookline Mass. on March 1, 1885.

Over mijn boekenThe library consists of the naval and maritime history section of Admiral Preble's library. These are now housed at the Navy Department Library.