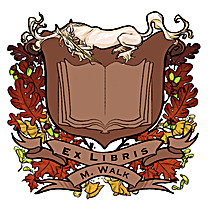 Over mijI'm a librarian who is more than a little pedantic about cataloging. I read a lot, but not as much as I think I should. I also do various handicrafts, play video games, and have very strong feelings about shelving books.

My user pic is a custom crest by Rachel Roach that I use as a bookplate.

Over mijn boekenI like to think of my library as eclectic. I collect a few authors (Tanith Lee, Diana Wynne Jones, and Robin McKinley). My library is exclusively books I own (I use Goodreads for tracking my actual reading) and is hopefully going to keep me from buying six copies of the same book. There are some authors I collect, which means I have multiple copies of the same book, so it's important to me that they have the correct covers and publication info! I do not add books I don't actually own to my library (nor do I add ebooks).

I also am a big comics reader. I use the tag "Graphic Book" for all my comics. The majority of what I own is Japanese manga, but I've been branching my way into other things (mostly indie stuff–I'm a Kickstarter addict).

I have not read a lot of books in my own library because I work at a library and my TBR pile is infinite and undefeatable, but some of those books have due dates!

My goal was to own a book stack taller than the Statue of Liberty, but I cleared that, and then I cleared Niagara Falls, so the next hurdle is the Taj Mahal!

GroepenBookcases: If You Build/Buy Them, They Will Fill, TinyCat