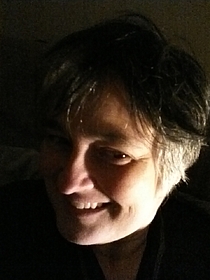 I first cataloged my books at the age of 10, on index cards in a shoebox. (It was before the era of the personal computer.) My first non-neighborhood job was volunteering at the local public library, where I used my first computer and first provided technical support.

"Friends": In general I only "friend" and accept friend invitations from people I know in real life. If your library is interesting I'll add you to interesting libraries, and maybe someday we'll get to know each other in person.

other links:
* My LT features wishlist

Over mijn boekenFirst of all, this is a mix of (a) personal library (inaccurate), (b) family reading logs (also inaccurate), and (c) books of interest.

The Stuff We Own: Some stuff is in storage in California and was entered here via an excel spreadsheet, so data -- especially edition data -- is likely inaccurate.

What's Hers Is Mine: All of this stuff is mine, because I have applied the doctrine of couverture to my partner's library. But some of the books originated with her. The science textbooks are all hers. The other science-related books are split between us. The queer & women's history is as likely to be hers as mine.

Help, My Kid Is Reading! When my kid was little, everything "she" read, I read, because I read it to her. Lately, however, she checks out scores of books from the library that, frankly, I have zero interest in reading. So increasingly my stats are being skewed by Geronimo Stilton, Dork Diaries, and what-not. And they're inaccurate as hell, because honestly, I can't keep up.

Duplicates: When we merged our libraries we had many duplicates, which we gave away at our wedding. But we still have a lot of duplicates, because we couldn't bear to give away (for instance) the first edition of Our Bodies, Ourselves; Coming to Power; The Feminine Mystique -- but we also wanted to keep a more current edition. Plus with a vast portion of my library in storage 3000 miles away, occasionally I have bought a duplicate intentionally or accidentally. And then I keep duplicates of some copies of works that are hard to find, that I want to have loaner copies of -- e.g., Alice Nunn's Illicit Passage. But because my cataloging data is not based on the book itself for the most part, the duplicates are really inaccurate - editions, number, etc.

Completeness of the library: I've added the vast majority of my books. New books come in from time to time (ahem). And, unfortunately, most of my collection is in boxes 3000 miles away, and was cataloged from spreadsheets. So inaccuracies abound. When my library is consolidated again, I'll go through and shelf-verify all the materials. Looking forward to that day!

Edition information: Adding library data from a very simple spreadsheet index means that my edition information is completely inaccurate. For 95% of the books I just picked the first available title. I've gone back and corrected a few where I had a sense of edition based on cover.

Specialties:
I collect in two major areas: feminist SF (collection & tag FSF) and critical information studies (collection & tag INFO). Within these fields particularly, I collect and own things I would not necessarily recommend. In particular, please note that not all things in @FSF are "feminist" per se; nor are all things in @INFO "critical" per se -- just of relevance to that general collection.

* Books tagged @FSF include:
- (a) SF books that are feminist (e.g., Joanna Russ' The Female Man);
- (b) SF books with some significant gender or sexuality element, of whatever political persuasion -- feminist, casually sexist, misogynist (e.g., Le Guin, Heinlein, Alph (shudder);
- (c) SF books by women or queers whose authorship makes them groundbreaking, e.g., early utopian novels by women such as Sultana's Dream by Rokeya Sakhawat Hossain;
- (d) relevant scholarship dealing with any of the above. I take "SF" very broadly to mean any speculative or supernatural element in work, including faint elements of magic realism or speculatively religious (depicting souls, ghosts, psychic powers, etc.)

* Books tagged @INFO include media studies, librarianship, freedom of expression, intellectual property, information technology policy, and so on. This collection operates as a professional bibliographic database for me, and includes many, many works marked "@unread" and "@unowned" but "@interesting".

Recommendations: Just because I own a book doesn't necessarily mean I recommend it. I collect books on some topics — for example, "sex wars in fiction" and feminist backlash novels — even though they're mostly atrocious and misogynystic. Most of the stuff I own, I like, or think I'll like -- I haven't read everything; oftentimes, I like a book by the author or I'm interested in a topic, and I buy others by the author or on the topic when I see them; but haven't gotten to reading them yet. Probably, I've read more than 75% of the library, but I wouldn't swear on it, because some of the library (which is mine! all mine!) is sourced from my Other.