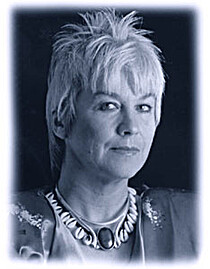 Over mijZsuzsanna Emese Budapest was born in Budapest, Hungary, during a big winter storm on January 30, 1940.

Her mother, Masika Szilagyi, was a medium and a practicing witch who supported herself and her daughter with her art, as a sculptress. Masika's themes always celebrated the Triple Goddess and the Fates, and Zsuzsanna, "Z," grew up respecting and appreciating Mother Nature as a god.

The poverty of postwar Europe and political oppression under the Russian occupation made Z fiercely political, so when the Hungarian Revolution broke out in 1956, she took her destiny into her own hands and became one of those sixty-five thousand political refugees who left the country, mostly young workers and students like herself. She finished high school in Innsbruck, graduated from a bilingual gymnasium, and won a scholarship to the University of Vienna where she studied languages.

Z emigrated to the United States in 1959, became a student at the University of Chicago, married, and gave birth to two sons. In Chicago she studied with Second City, an improvisational theatrical school, the only one in the country at that time.

Her family's spiritual tradition, however, started seeping back into her life, and she practiced solo worship of the Goddess at her home altar in her backyard.

When she entered her Saturn cycle at the age of thirty, she became involved with the women's liberation movement in Los Angeles and became an activist herself, staffing the Women's Center there for many years.

There she recognized a need for a spiritual dimension so far lacking in the feminist movement and started the Women's Spirituality Movement. She founded the Susan B. Anthony Coven Number l, the first feminist witches' coven, which became the role model for thousands of other spiritual groups being born and spreading across the nation. She wrote The Holy Book of Women's Mysteries (Weiser Publishers, 1989) which was originally published in 1975 as The Feminist Book of Lights and Shadows. This book served as the first hands-on book to lead women into their own spiritual/Goddess heritage.

Z was arrested in 1975 for reading Tarot cards to an undercover policewoman. She lost the trial but won the issue, and the law against psychics was struck down nine years later.

Z has led rituals, lectured, taught classes, given workshops, written articles tirelessly, and published in hundreds of women's newspapers across the country. She has powerfully influenced many of the future teachers and writers about the Goddess.

Today Z lives in the San Francisco Bay Area, traveling a lot, giving workshops and lectures, but always making time to smell the roses. She is the star of her own cable TV show called 13th Heaven and acts as the director of the Women's Spirituality Forum, a nonprofit organization sponsoring a monthly lecture series in the Bay Area about the Goddess, spirituality retreats, and annual spiral dances on Halloween. Z founded and sponsors the Dianic University Online, a vagina-friendly online school for Dianic Wicca and Goddess studies for women.

Over mijn boekenBooks by Z Budapest: